Notes from a Wicked Woman

Radio has been my first love FOREVER.

I made my very first program in the mid-1980s. It was the time of gargantuan shoulder pads, John Hughes movies and elbow dancing. Thankfully by then I’d discovered ska music, black Levis and brothel creepers.

In my second year of university, one lunch time I stumbled upon an “extra curricular” workshop paid for by my Student Union fees. The good folk at the Union had kindly put it on for misfits like me, desperate for distraction from what I was finding to be less-than-fulfilling paramedical “yoonee” studies. Radio production and reel-to-reel tape decks it was!

Run by a guy called “Paul” (veteran radio trainer Paul Vadasz as I later found out), he was recruiting students to make rookie programs for a local public radio station with an “educational” license.

The “station” turned out to be 3RRR-FM, and the moment a major turning point in my life. I instantly fell in love with making radio, jumping at the chance to become a part of Melbourne’s alternative broadcasting scene, which at that very moment was becoming a force to be reckoned with. 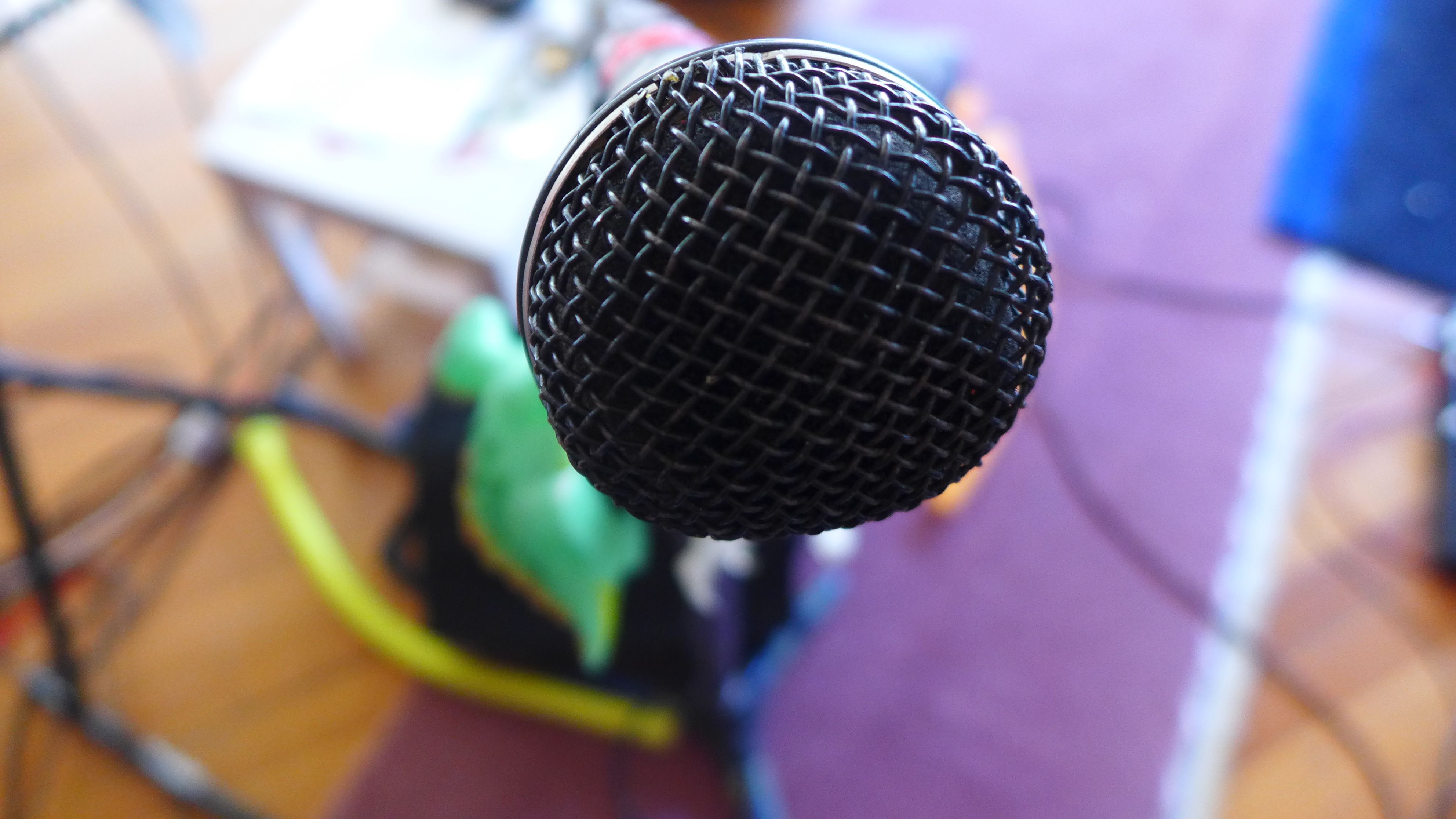 A boyfriend in a Japan-knockoff band had introduced me to 3RRR when I was 17. I’d not long been listening to this lavish wild-child of the Melbourne airwaves, an uncompromising, non-commercial FM haven of “alternative” and “punk” music. It was vastly different from the diet of predominantly commercial bombast that 3XY and EON-FM had fed me throughout my teens via my beloved Hitachi three-in-one.

I couldn’t get enough.

Fast-tracking my transition from Australian Crawl, ABBA and Leo Sayer (yes, Leo Sayer), to Talking Heads, Laughing Clowns and The Triffids, I’d happened upon an incredibly exciting, vociferous, world of opinion, art, culture, comedy and politics. It was far from anything I’d known growing up in the deep south of suburban bayside Melbourne.

All this. Without ads. I was a goner.

After throwing myself wholeheartedly into the workshop I careened into a five-year love affair with RRR, derailing my “paramedical career” in the process. For the next half a decade I would spend endless – countless – hours, late nights and weekends cranking out as many radio documentaries, live shows, stories, packages and programs as possible. Anything I could get my hands on.

All analogue. All as a volunteer. 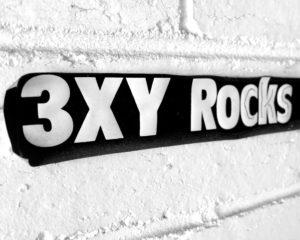 I had my crap “day job” at a crap call centre. I had patience. And faith that ‘the long game’ would pay off some day, somehow. No plan. Just hope. That it would.

Both my parents thought I was nuts, bless their cottons. The fruit of post-WWII, Depression-era, struggle town upbringings, they were horrified at how I could chuck in my studies and “a good-paying career at a hospital” to work at a scungy radio station for free.

They spent the next five years telling me so, asking without fail each week whether I’d “earned any money from that radio business yet”.

With the arse literally hanging out of my pants, still no professional prospects on the horizon, yet a deep, unwavering optimism, in 1993 I decided the time had come to jump into ‘the real world’. I consummated my tenure at RRR by producing the comeback series of EEEK!, a much-loved, weekly, 90-minute live program with the guiding mantra, “Educate, Elucidate, Ejaculate”. Was there any other way to go out?

Hosted by trash and junk culture aficionados Bruce Milne and Philip Brophy (also old friends), it was underground radio of the highest/lowest order. My crazy, eclectic, immersive and illuminating DIY traineeship had finally come to an end. You couldn’t buy that kind of formative experience today – for love nor money. 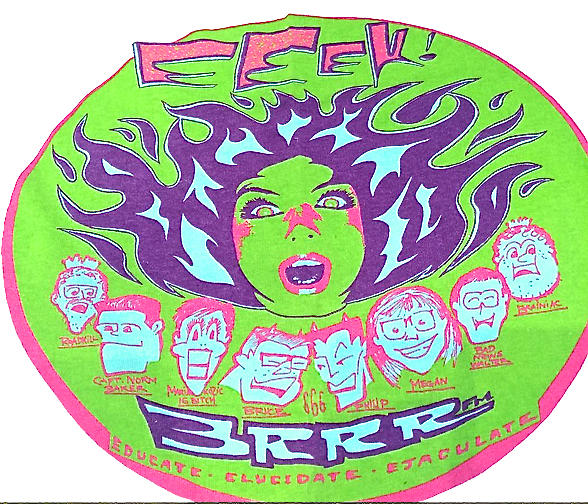 It would of course take another five long years before a “proper” job came along and any remuneration to speak of. But my time at RRR taught me something that others – who’d perhaps had a swifter pathway into professional radio via stand up comedy, a trainee-ship or national radio school – didn’t have: Resilience. Oh, and a shit-ton of Resourcefulness.

And I was Resolute. So be the three ‘Rs’.

Plus, once in 1988 Joey Ramone walked so close to me that I almost fainted right onto RRR’s stinky, sticky carpet. (Smoking and drinking in the building were allowed in ‘those’ days.)

Right then, I knew: this must be the place. Home.

Since 1998 I’ve been more or less ‘on the books’, mostly at the ABC: first at triple j where I had the great privilege to be the incumbent film critic and commentator for a decade. (Oh, and an arts reporter.)

I worked really hard there too. (I work really hard at every job I do. Another corollary from the early days…)

Pretty quickly it led to regular spots across a ton of different shows across all ABC networks: Local Radio, Radio National, Radio Australia, ABC Rural – even Classic FM, where I had one of my most fulfilling radio experiences ever talking for what seemed like hours (it was) about progressive film score music, on ‘New Music Up Late’. (Save for the latter, unfortunately 99% of those friendly “cross-network” specialist spots were very seldom paid. Yep. Volunteer work at the government broadcaster: alive and kicking.)

After being a full-time critic and commentator for ten years, I moved on to present my own programs on “grown up” radio (ABC Local) on networks in two capital cities (Sydney and Darwin), and one big regional one (Bendigo). Another “steep learning curve” when it came to learning the craft of presenting – and making – good radio.

After a wee break, my last ‘posting’ was at ABC Central Victoria (2013-2015) where for three years  I rose at sparrow’s every Saturday morning (and a good number of weekdays), to broadcast “Breakfast” to great swathes of my home state.  The hours were crap but it was a ton of fun, thanks in part to a big-hearted producer and a rare, kind-hearted manager. I fell in love with radio all over again.

A year on and I now find myself living in Berlin. I also find myself without a radio show. And I’m starting to miss it.

I look around and see every man and his Zoom is starting a podcast. “Yeah, I could do that,” I say. But what kind of ‘show’ do I want to make? I have no agenda, no broadcaster to work for, no “real” reason to.. What would it be about? What do I have to say? And who would care either way?

Turns out I know a bunch of very interesting people here, women especially – “wicked” you might say. And I’m in the right town to find them: Berlin, “Babylon on the Spree”, a city whose inhabitants once instilled “voluptuous panic” into the hearts and minds of Central Europe (as author Mel Gordon so deliciously coined its “Weimar era”). The grumpy, Deutschland capital where bohemians, punks and circus folk continue to flock, even as gentrification threatens to rot its historic hedonist foundations… Maybe they’d like to have a bit of a chat?

Unlike 1987, the hard work has been done. Now I have a voice – a point of view – and most importantly, experience. Fully formed. And somehow, most beautifully, as I come full circle, back to the starting point with nothing but a will to create, a makeshift studio, a laptop to edit on (instead of a reel-to-reel) and a drive to make something meaningful to listen to – IN A SEA OF NOISE – I find myself realizing that I can do it. With my eyes shut. I’ve spent over half my life making good radio and connecting with audiences. Listening to other people and what they have to say.

The hours are long again; the learning curve is steep, again. Frankly, it’s a massive undertaking, I’m a bit tired from all this ‘trying’, and just like 1987 it’s another ‘career gamble’… (My dear parents’ voices are in my ears again!) But arriving back at that place of possibility – to “begin again” – has its advantages. I now have the ‘long game’ perspective: I know what I don’t want to sound like. And I know someone who might want to co-pilot with me – hurrah! So much more fun than flying solo!

Radio’s my band: this is where I get to shred my instrument. 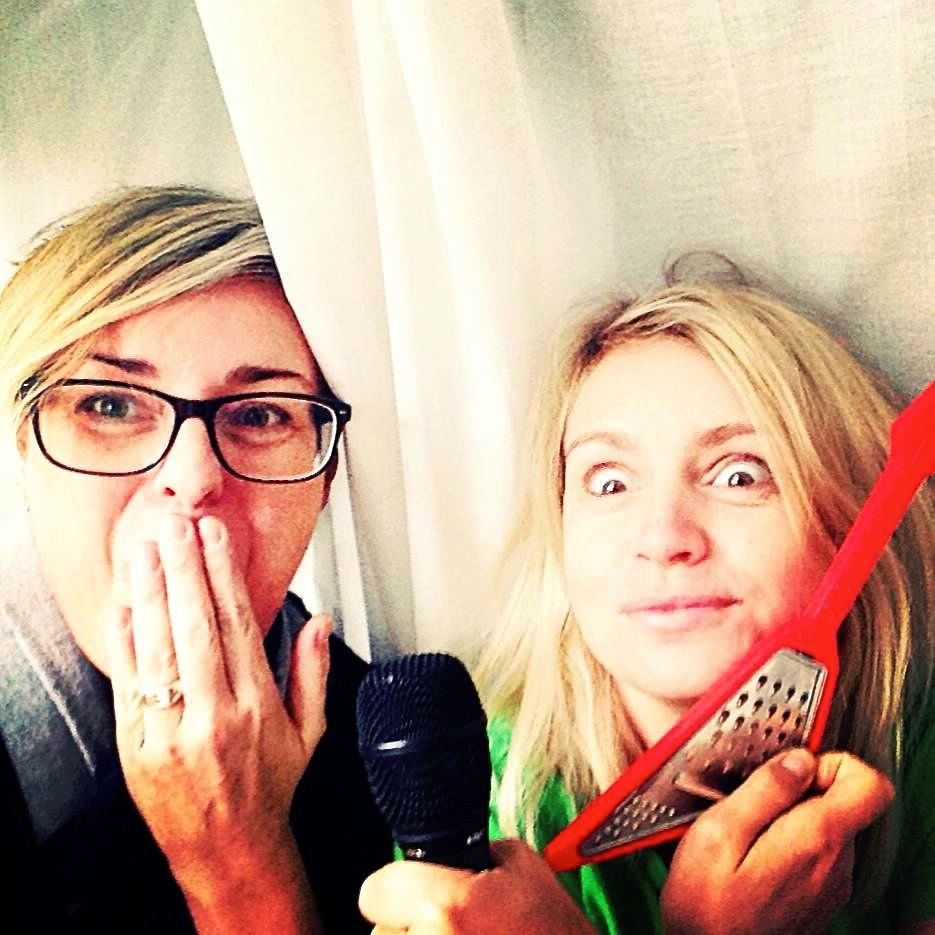 The thing I love the most about radio is the dance: the dance between freedom and format, the dance between “you” and “the audience”, between your voice and their minds. Between music and talk; playfulness and solemnity. In real time. The present moment. If you can nail that, radio can be a truly empathic, enlivening exchange – and vocation.

One day, working for the ABC and presenting Drive, I was “invited in” to the manager’s office. At ‘peak hour’ I’d played Joy Division’s ‘She’s Lost Control‘, urging people during the back announce to see “the mighty biopic about Ian Curtis and his tragic life cut short by his own hand.” (It was called ‘Control’ and had just come out on DVD). The manager scolded me, saying “you could harm the brand”. I got terribly upset: I thought she meant I was encouraging people to self-harm by playing Ian Curtis on the radio. When she finally explained what “harming the brand” actually meant – “Really?! That’s a THING?! OMG…” – I laughed in relief for FIVE SOLID MINUTES. Yep. I just wasn’t made for these times.

Maybe I can release my daggy, Sonic Youth-loving inner rock chick again. Dial up her volume up (instead of down).  There’s been a Wicked Woman lurking behind that mic for years. Time to let her out with the aid of an articulate, audacious co-host –  Samantha Wareing, a sister Wahlberliner who’s been embodying a kick-arse wicked woman of her own for several decades and just as eager to give her an airing.

So this is what we made: Three Wicked Women. We’re into it three episodes deep with another three to come. Lots of laughter, frayed edges and thoughtfulness. Seriously interesting people to chat to, listen to.. In our “bordello of pod” as I like to call it. One hour’s worth. Fully loaded, fully sick, fully voluptuous.

From my heart to your ears – and on behalf of my co-host Sam – I hope you have as much fun listening to this podcast, as we did making it.

“Don’t be afraid to start over, it’s a new chance to build what you want…” – Anonymous